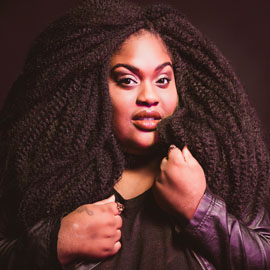 She was the big surprise during the Eurosonic Noorderslag 2015 festival, the winner of the Amsterdam Pop price 2014 contest, and she is “NPO Radio 6 Soul & Jazz Talent”. Only a handful of the many achievements that singer Sarah-Jane has accomplished in such a short time. But this is just the beginning…

“At home, when the phone rang, I wanted to make a song out of the melody. Visitors never left without hearing me sing. There always was a lot of Soul, R&B and Surinam music playing in our house and as a child I was fascinated by the rhythms. For every emotion that I felt, there was a solution in music and it became very clear to me: I am going to make music!”

In 2008 Sarah-Jane’s musical adventure began as a member of The Xperience band. She was seen throughout the country as a singer for several hip-hop formations such as Zwart Licht, Jayh and many more. It was the huge success of The Xperience that made sure that she already entered big stages like Lowlands and Noorderslag.

Sarah-Jane performed as a background singer for Dutch finest Soul singers Glennis Grace and Sabrina Starke, as well as the famous Rita Marley. She’s also no stranger of the Dutch theaters after the Soul Sisters tour.

In 2012 Sarah-Jane made a step in her solo carrier and released her first EP called ‘Deigh & Nite’. In May 2014 her first single ‘Psychedelic Love’ came out along with a great music video. A true success! This song led her to get nominated for a Radio 6 award.

In the meantime Sarah-Jane also got introduced on Dutch Television. She is a very welcome guest of the biggest talk show on Dutch national television “De Wereld Draait Door” where she also performed her single ‘Psychedelic Love’ In January 2015.

2015 is going well for Sarah-Jane. In July she will be performing at the major North Sea Jazz Festival in Rotterdam. A long cherished dream, which was impossible according to her E.N.T specialist. Her second official single “Letter To The Moon” has been released on May 29th. Also there is another EP scheduled as well as a tour somewhere around the end of the year.