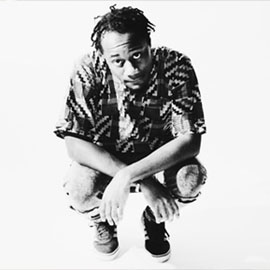 Yaw (Eddy) Addai, born October 17th, 1991 also known as Drummakid, always had a major love for music. This began at a very young age while listening to traditional West African music. Growing up in a Ghanaian family music has always been an outlet.
At home there was one family computer, which was always in his big brothers (Nana Yaw) room. As a ten year old every now and then Drummakid snuck into his brother’s room. Playing around on the family computer he got introduced with a program called FL Studio and started to experiment with making music. At the age of fourteen he began playing instruments in church together with his other brother (Ebenezer). This is where he developed his passion for playing the drums.

After dropping out of college he and his “KRU“ decided to start their own band/movement called The Xperience. Very soon after Drummakid played the drums for various artists in the Dutch music scene such as: Berget Lewis, Jennie Lena, SEEKA, Zwart Licht XL and many more. While playing for Seeka he had a strong urge to be more than just a guiding drummer. He more likely felt the need to express himself throughout music and wanted to be more authentic. At this point he started producing his own music inspired by Kanye, Pharrel, Teddy Riley, Dr. Dre and others.

After producing on his own for a while he joined forces with fellow musician and friend, Marvin Escobar. In spite of his parent’s disapproval Drummakid moved in with Marvin to continue making music fulltime. Together they created their own sound, which led to producing 23 songs for the first solo album of Zwart Licht member Akwasi, from which the song “Dorst” went Gold. During this period Drummakid started rapping on his own productions. His first project was an (unreleased) mixtape with Kalibwoy, who motivated him to pursue a solo career. Even though he was also drumming for successful rapper Typhoon, he still felt there was a missing piece to his puzzle.

The success of touring with Typhoon created possibilities for Drummakid to build his own fan base. He also discovered that he had a “special weapon”, performing his Raps behind the drums. This is when several people of the industry developed a love for Drummakid and felt the need to see him perform live as a solo act. A few months later he made a bookings deal with MOJO (Live Nation) Concerts and soon after he made his first live solo debut at the prestige Eurosonic Noorderslag festival.

The future is looking very bright for Drummakid. 2016 will be the year of new releases, collabs and a lot of great performances. Stay tuned cause this “New Kid In Class” has a lot to bring and he definitely got “What U Need”.